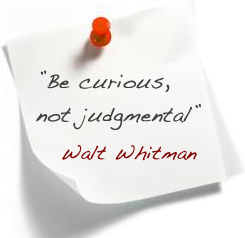 Be curious rather than judgmental.

If you remember and apply this mantra regularly and consistently, you will be halfway there in improving relations with your teen.

Much negative behavior is driven by a need for attention or a need that isn’t being met.  Responding with force or ultimatum reinforces negativity and invites resistance.

Rather than trying to change your adolescent’s poor behavior, pay attention to his/her moods and feelings that are bringing about that behavior.  Through exploring “where he’s at,” you can figure out what he is REALLY trying to express, and then negotiate ways to meet his needs and maintain harmony.

Avoid being judgmental and confrontational.  Most importantly — avoid focusing on your child’s inadequacies. A child who hears mostly criticism from his parent becomes discouraged at his (albeit at times misguided) attempts for attention and for getting his needs met. A circular power struggle is set in place, with parental force and coercion inviting further resentment and resistance.

What instead?  BE CURIOUS! Explore what your teen is trying to convey, and clearly express your concern and care for those feelings.  Rather than blaming him or justifying your own stance – listen closely to what he is sharing with you.  Once your teen’s feelings have been validated and he feels heard and understood, he will be more open to learning how his behavior is frustrating you and affecting your ability to support him.  You can then negotiate an agreement that addresses both of your needs and concerns.

When a child, younger or adolescent, feels heard, understood and respected (rather than continuously criticized and judged), he is more likely to be respectful in return and to want to please you.  When he is granted responsibility, a degree of self-reliance, a sense of team effort in which you are on his side, he is encouraged to be cooperative rather than rebellious.